Chat about the games
http://www.windowsgames.co.uk/forum/

2 modes -- resurrect dead or not

Page 3 of 3
by the space predator
for me, it happend every time.
by TheKangaroo
Interestingly it never happened to me ever. Are you sure those were active missiles?
by Fusion_power
Probably should define 'active missile'. This is a missile that is still capable of accelerating. The daycorn can steer for 2 turns. The Plectron can accelerate for 3 turns. If any missile is still capable of steering, then the mission does not end. One of the more interesting quirks is that you can be killed by a stray missile even after mission end. You can't steer your ship for 5 turns after mission end and during that interval, if you run into a stray missile, you can be killed.

by Schroeder2593
Whats the point of trying to play CM if the commander gets killed (it happens a lot), and you have go all the way back to start of the game, even if your a hundred missions in to the game? I mean, its frustrating!

I can definitely understand though what Sean was saying about constant saving being tedious; being able to save all the time in some games takes the fun out of them.

But, imagine other games, such Tomb Raider or Duke Nukem without the save and auto save features. They would be almost impossible to finish!

What I have in mind is the best both worlds. An auto save feature that saves your game every few(5-10) missions. This way the game is still challenging but isn't frustrating!
by the space predator
and each time you receive a promotion.

but I still think that this should be optional.
by Schroeder2593

but I still think that this should be optional.

I was thinking that the auto save feature could be toggled on and off.
by Sketchy
No, No, No!
Of course Tomb Raider and Duke Nukem would be almost impossible to finish without saving - but in Critical Mass there is no finish - the sole aim is to survive for as long as possible, and in doing so, gain as many medals as possible.
It is far more comparable to something like Tetris, Pinball, Rogue, or any old arcade game - and imagine how pointless those would be if you could save your game part way through (even if it's only at 5-10 level intervals).

If you allow save games the high score board becomes irrelevant (a measure only of time spent playing, and not actual skill), and without that, what motivation is there to keep playing?

Besides, balancing risk and reward (ie. Deciding if you should eject or try and hang on for one more kill) is a skill in itself. Maybe you just need to work on that some more...
by Legacy
Sketchy said everything I was going to. Seconding his response.

An alternative for testing your custom ship

by hazenut
I feel what we need is actually a quick-start mode, so you won't bother with your career. You are given sufficient money and you select one of the missions to start. Now you have instant access to your custom ships.

by the space predator
Yes, It can be good. It will give you the possibility to fly mission for fun. To test your custom ship... Maybe it can be like in FF, you select the mission, the two nation, the difficulty, the kind of troops...
by Legacy
I'd never quite thought of it that way... just have an Instant Action mode where you set all the parameters, but only play one mission.

by Schroeder2593
After trying a couple of new strategies I found, I've decided that there really is no need for a save option. (I thought of an option to continue your game with your current amount credits you had and with your score (and possibly your rank and medals) reset to zero. I think this a good compromise; it allows everybody to have a score, medals, and rank that can't be cheated, while allowing anybody who wants to continue, to go ahead and continue with a nearly clean slate.)
When I put some more thought into these two strategies, and one I came up earlier, I designed a set of ships that are extremely though to destroy or even detect with conventional ships.
Any body that is new to critical mass and thinks that there should save option should probably look at my post for design ideas. What I have in mind is a design that uses at least 4 stealths per side, has at least 2 repair bots, and 4 command centres. Any thing that
uses those design elements in those amounts (or better) seems to survive most battles.
Also anything that uses repair bots (up to 6), a lot of command centres, and a ton shielding is almost invicible.

If I can I'll post pictures of the ships I designed at some point.
by Schroeder2593
Here's what I designed: 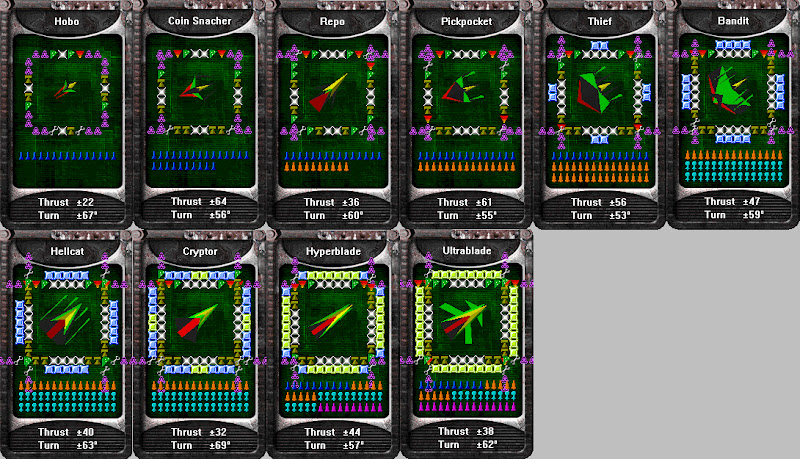 by TheKangaroo
Aren't those ships awfully expensive to acquire, thus requiring you to be successful before even getting them?
by Sketchy
I see someone's been using the ship file editor.
They're good looking ships, but I think there are a few problems...

I don't like your choice of missiles - Daycorns and Plectrons are much better (Geenees and Oriks are the worst missiles in the game).

There's no point having all those command centres and repair bots on the more expensive ships, as they already have more than enough shields.
In spite of having all those thrusters, the ships are still slow and cumbersome, because they are too heavy (repair bots weigh twice as much as other components). Only the Cryptor has acceptable agility.
All times are UTC+01:00
Page 3 of 3
Powered by phpBB® Forum Software © phpBB Limited
https://www.phpbb.com/