Chat about the games
https://www.windowsgames.co.uk/forum/

Screenshot of the new version of Slay

Screenshot of the new version of Slay

by Sean OConnor
I'm making good progress on the new version of Slay. All of the gameplay is working now. The new AI is nearly finished and can see when it can cut up enemy territories and bankrupt them. Here's how it's looking so far: 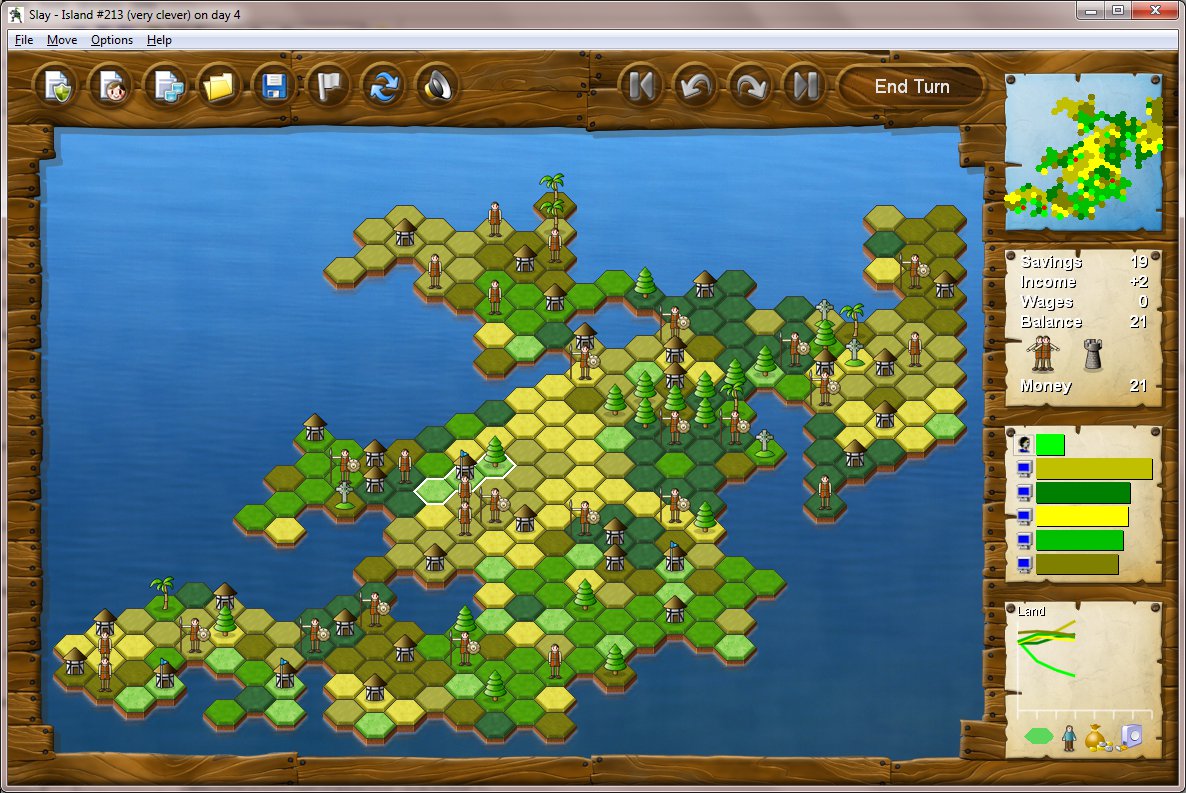 I still need to re-implement colour schemes, themes, the map editor and networking and then it's done!
by CoffeeShopFrank
Thew new version looks swell.

Quick question: Will we still be able to play the old version of Slay after the new version is released?
by the space predator
if you don't replace the files, yes

they look horrible compared to all these beautiful graphic all around
by Fusion_power
hope you addressed the logic for attacking castles. The current AI will attack the capital in preference to destroying the castle, often at significant disadvantage from failing to take available territory.

Let me know when you get it ready to kick the tires.

DarJones
by Ber
Looks awesome! Can't wait for this to be out

You know, it sounds like the version you currently have could be given to a few people to beta test the new graphics and AI while you work on the rest of the features

ps. I've read enough of these forums to know how good DarJones is at Slay: If the new AI can beat him I propose it's introduced as a new difficulty level 'Godlike'

by CoffeeShopFrank
But what would the guy at the main menu look like for godlike?

by Sean OConnor
Yes, I think I am going to have to create a 5th difficulty level! I'll use the Castle graphic for that so you've still got the old 4 levels too. Not sure about calling it "Godlike", maybe "Formidable" or just "Super Hard"?

I'd like to aim the new Very Hard to be about as difficult as existing Very Hard so people can easily jump between versions.
by the space predator
isn't the AI name "very clever"? so why not "genius"?

the difficulty level can also be named "insane" or "extremly hard"
by gruff
The new highest level should be called "DarJones" of course.

New look is great. Peasants etc. could be made to stand out from the background a bit more, as they do in the current version.

I am praying for a full editor.
by Fusion_power
Gruff has played head to head with me and several others who are outstandingly good. I can always brag that 2 or 3 of them had to gang up on me to win and sometimes even then I could trounce them. I still remember a game where I cut across two other territories just to bankrupt gruff.

Thanks for the compliment gruff, but in this case, I would vote for Genius.

DarJones
by gruff
Fusion_power here is famous in Slay circles for being able to finish any challenge island in 6 days just by sneezing the right way. He doesn't even need to touch the mouse.
by jcscar21
Will their be an upgrade price? Or will we need to buy the entire game again?

I love slay have been playing it for years. I hope the new version window can be maximized.

Any idea on a timeline for this to be released?

I'm just giddy after looking at that screen shot.
by Sean OConnor
Yes, I've always been happy to give free upgrades to people who've bought my games.

The new version's window is bigger than the current version's one, and it can be stretched/maximized but it always keeps to the same proportions.

It's not far from being ready now. I haven't done the Themes yet (although the current themes won't work on it as there's so much more graphics now) and networking is still to be added.
by jcscar21
I'm not big on themes or networking. Have a beta version I could play/test?
All times are UTC+01:00
Page 1 of 1
Powered by phpBB® Forum Software © phpBB Limited
https://www.phpbb.com/