A gun system, with much higher acceleration, and perhaps the ability to launch in four different directions(side mounted gun barrels shoot to the side, nifty for when your escape pod side is coming under fire, or to the rear(to get those pesky chase ships off your tail). Perhaps there could be a shotgun-like flak cannon round, dispersing several light hitters in a fan-out pattern, which would be ideal for ant-missile use. A standard HEAP-like round for anti-ship use, and maybe some kind of EMP shell that disables a ship for a turn or three. Gun barrels should compete with missile tubes for weapon hardpoint count, still being limited to four. Or perhaps a limit of four missile tubes and one or two gun barrels. Guns would sacrifice homing and large warheads for simplicity, light ammunition weight, and initial velocity, leaving the game balanced. Each gun would have its own magazine, a little box listing the rounds it carries as selected when designing the ship. This way it would be fairly simple to keep track of what direction the rounds selected will be going if gun barrels point in multiple directions. Presumably it wouldn't be terribly difficult to program in the physics and interface, but the AI would have to be taught some new lessons for handling these weapons.

Bombs, with heavier(up to 25 Mton) warheads but absolutely no fuel, and mines, which fire fuel to bring them to a halt, would both add options for new classes of ships. Mine layers and minefields would make attacking starbases and planets a totally different ball of wax.

Fuel tanks or some other way of metering delta-V would absolutely change the face of the game. Heavy, less maneuverable vessels could carry fuel pods to extend their combat operations window, while light craft would have the advantage of having more punch for the same cost. This is a major aspect in the loss of a battle in a science fiction short story I wrote once, as planetary defenders burned up insane amounts of fuel charging the attackers at excessive speeds, while the elite pilots they faced were rationing fuel for the coming dogfight. Fuel would be used up in turning and in acceleration/deceleration, making this one of very few games to use anything resembling Newtonian physics in space.

Perhaps a system similar to that deployed in most of the FASA Battletech-based games out there, such as Mechwarrior and Mech Commander, wherein you can salvage and sell/use some components scavenged from allied and enemy vessels lost or disabled in the fighting.

A mode wherein we can setup custom battles, a way to test ships and squadron formations, would be neat.

Have you, Sean, ever considered the idea of having expansion packs for games? Pocket Tanks, for example, has weapon mods/packs that can be purchased at a low cost to add to their game, and many large software vendors sell add-on packs as well. An Advanced Tactics variant of CM, a little less newbie friendly but with more options for hardcore CMers, would be worth at least a few bucks to me. I don't know about paying another twenty(I'd definitely consider it), as I bought the bundle, but I'd gladly pay 10USD for such an addition.
"Every man is my superior in that I may learn from him."

Can guns fire in outer space? Pardon me if I'm wrong, but I thought that was kinda hard to do. I've seen it in movies but... ahh who am I to question. I'm no astronomer or anything.

Anyway, lots of great ideas portrayed in great detail. Very well written document. And, as I can easily see from the post, you're very dedicated and fully support your suggestions. I admire that.

As far as my two cents go though, I think many of these great ideas go beyond the scope of Sean's programming. He is after all only a one-man-army when it comes to making his games, and I doubt he can afford to spend so much time developing one game. From the sounds of it, seems like this would make CM into a more big name company creation. (Anyone ever played Deadlock II? By Accolade and Cyberlore Studios? *silence* THIS?! 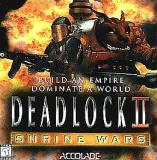 Ok... so that game goes back a little. Still, awesome old school game for Windows 95!) Anyway, I think this is probably more of a dream for some of us right now. Seriously, we huge CM fans can get a little carried away at times. I should know... I'm like.... the king of doing that about CM. Hehehe. In the mean time, still good to lay as many ideas as possible on the table. Who knows, maybe one will "click".
My thanks and best regards to all my former submitters.
Top

now that i think about it, you do need air for the explosion of guns, right? but then again, there must be ways to make guns for use in space. then again, look at the missiles. we're using megaton warheads or something. there's no way bullets can do any damage.
(\ /)
(O.o)
(> <)
Top

Anyone ever played Deadlock II?

A conventional firearm can fire in space.

But I was thinking something more along the lines of railguns.

In either case, it is a mistake to write guns off as being impractical here. For anti-missile roles, a scatter shot cannon would be excellent. Against ships, well, during the cold war various tactical nuclear artillery pieces were designed. It's not too far fetched to think of tacking a warhead of some sort onto one of these suckers. Also, EMP rounds, as I mentioned before, would be considerably lighter than a general purpose nuke.
"Every man is my superior in that I may learn from him."

i guess you do have a point there, and railguns could be sweet. but i think that making side-shooting guns would change the feel of this game too much, and i dont like the emp stuff. i suppose they could disable parts for a short time instead of destroying them, but that's just adding unnecessary junk.
(\ /)
(O.o)
(> <)
Top

You know, I've been thinking about drawing a comic about Critical Mass, because that way I could put in all these cool ideas without Sean having to program anything

Although I'd have to figure out how to draw a Nightmare or a Warrior..
My webcomic:

that would be awesome OMJ! i don't think warrior would pose too much of a problem, because you just need the basic outline and maybe some shading, but the nightmare could be hard. i wouldn't mind at all if they were simplified significantly, though. it would be cool just to read something like that.

That would be good.

Would it be abstract or set in a universe.
Top

Hmmm, I haven't thought too closely about it yet. I just realized one day I'd like to draw some explosions

I've sort of started a CM back story to explain why my ship descriptions reference Earth so much, but it has nothing to do with the other races backgrounds.

It'd be wicked cool to see a comic.
"Every man is my superior in that I may learn from him."

Hmmm, you know, I recall seeing somewhere in the game some kind of story..maybe back in the 1.0 days. You know, something about the Critical Mass engine and like the 21st century or something? Anyone else recall something like that? Because I can't find it..
My webcomic:

Booyachaka! OMJ that would be awesome to see. I can almost picture it now... *is stunned... in advance*

) And yeah, an anti-missile thing might come in handy at times. However, I do think guns on the sides of your ship AND on the back would make you into more of a gun-pod that a space craft. Built-on turrets would make better sence at that rate. Why not go the whole 2π rads... 360?.
My thanks and best regards to all my former submitters.
Top

Fighter_Ace wrote:Booyachaka! OMJ that would be awesome to see. I can almost picture it now... *is stunned... in advance*

) And yeah, an anti-missile thing might come in handy at times. However, I do think guns on the sides of your ship AND on the back would make you into more of a gun-pod that a space craft. Built-on turrets would make better sence at that rate. Why not go the whole 2π rads... 360?.

Simpler implementation into the game in terms of coding. Also, turrets would change the aesthetics of ships.
"Every man is my superior in that I may learn from him."

I doubt it. Shouldn't be too hard to code. Just place a mini-turret on top of the craft and have it replicate the same X and Y coordinates as the player. I envisage rail guns, EMP missiles, and anti-missile flack being a much greater challenge. That would require a whole new script. Not to mention the whole issue of graphics and the capital needed to make such a melioration. We're talking about a need for a whole array of graphics.

And no, I don't think a turret mounted on a ship would incur any adverse changes in physical appearance. Seriously, I'm a huge fan of WWII airplanes. And let me tell you this, I don't think any of those turrets on that B-17 Flying Fortress make it at all "ugly". 13? M2 Browning .50 caliber (12.7 mm) machine guns in twin turrets, including single dorsal, fore and aft beam positions (with optional extra nose armament fitted in glazed nose).

Wanna play?
My thanks and best regards to all my former submitters.
Top
Post Reply
171 posts